In one of our previous newsletters, we had mentioned that photographer and film maker John Foley would come to our February meeting to show a film he has made set in the Comeraghs. He will now come to our March meeting instead. Our March meeting is on 3 March at 8pm in the Tudor. We will confirm that he is coming in advance of that meeting.
Posted by Dungarvan Hillwalking Club at 08:27 No comments:

Fitness, Friendship and Fun in 2020

Fitness, Friendship and Fun in 2020 with Dungarvan Hillwalking Club

At this time of year, resolutions are made – and then quickly broken. But at Dungarvan Hillwalking Club, we make it easy to keep your resolutions. Our motto is Fitness, Friendship and Fun and that means we’ve got all the basis covered. It’s not just about physical fitness – your social life and your mental health will get a boost too.

Here’s a flavour of how we can help you keep your New Year’s Resolutions past 31 January.

Fitness: Many of us want to get fit when a new year comes, and Dungarvan Hillwalking Club makes it easy for you to achieve that goal. We offer four walks a week, so there’s plenty to choose from, no matter how busy your schedule is. People often think you can only do hillwalking if you’re a rugged mountainy type. But we’re very committed to making hillwalking accessible. Whether you want to scale the heights of the Comeraghs or do a gentle ramble in a forest, we have the right walks for you.

Friendship: Have you decided this is the year you’ll expand your circle of friends? At Dungarvan Hillwalking Club you’re guaranteed to make friends. As soon as you arrive on a walk, there’s a friendly face to say hello, to offer you a lift and to give you advice about what to wear or what the terrain is like. And you’ll be able to bond with the other members on our holidays and weekends away.

Fun: You’ll be caught up in a social whirl of activity when you join our club. We organise nights out, fun charity events weekends away and even holidays abroad. There’s always something happening, and you’ll never be lonely or bored. Even if you just come on our walks, they’re full of laughter and crack. It’ll be your most fun year ever when you join our merry gang.

Here's a pic of some of our members having a fun day out in Crosshaven, which happened last September. (Photo Credit: Eibhlin Power) 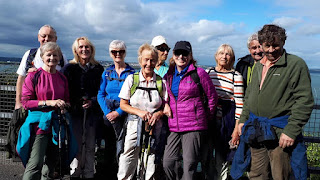 If you’d like to find out more about the fitness, friendship and fun on offer at Dungarvan Hillwalking Club, visit www.dungarvanhillwalking.org or contact club PRO Derbhile Graham, derbhile.graham@gmail.com

Posted by Dungarvan Hillwalking Club at 18:38 No comments:

This event was a success, despite the gloomy weather, with around 31 people turning up to walk. The walk went along the Ardmore cliffs, and the path along the cliffs has been revamped, making it much easier to access. Heroic attempts were made to keep the rain away, with Christmas carols sung at various stages of the walk, at varying levels of ability.

Peter Mangan led the walk, so many thanks to him. Big thanks also go to our catering team, Erich and Ronagh Baumann, who provided mulled wine and mince pies. These disappeared in no time. Thanks to all who brought cakes and other confections, and above all, thanks to all who contributed to our bucket collection for our three charities, the Lions Club, Mountain Rescue and the Hospice. The rain did come when we reached the carpark, but this did nothing to dampen our spirits.

If you’re planning to go on the club weekend away to Kilkeel Co. Down, happening on the May Bank Holiday Weekend, don’t forget to have your deposit in with Mary by the 7 January meeting. The deposit is €50, and the remaining €120 is due 3 March. For more info, contact Mary Murphy on 087 2273825. Thanks to Mary for her hard work in organising the weekend.

This was a huge success, with some revellers leaving Merries Restaurant at unmentionable hours. The food was tasty and the crack was mighty.

Tony Fitzgerald is planning a trip on the Camino Inglese in Spain on 6-13 September. The Camino Ingles is one of the shortest routes to the pilgrimage city of Santiago de Compostela. If you’re interested, you can contact Tony on 0872588171

There is a plan to bring in a guest speaker for our February meeting, on Tuesday 4 February at 8pm in the Tudor. John Foley is a talented photographer and film-maker and he will share his experiences with the club members. We feel that having speakers adds an extra dimension to the meetings, plus you get all the inside gossip on what’s happening in the club.

If you have any news or walk reports you’d like included in the club newsletter, please contact club PRO Derbhile Graham, derbhile.graham@gmail.com.

Posted by Dungarvan Hillwalking Club at 10:08 No comments: