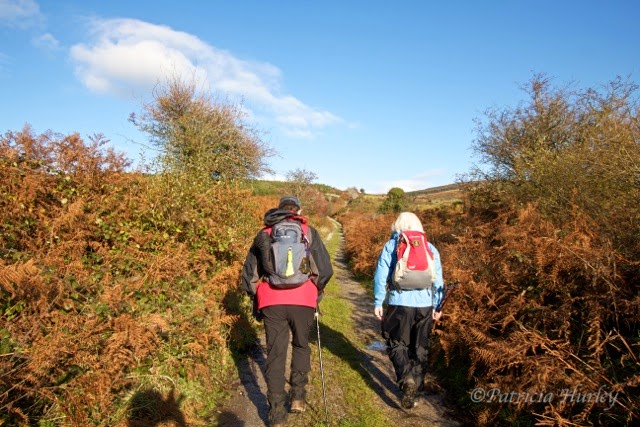 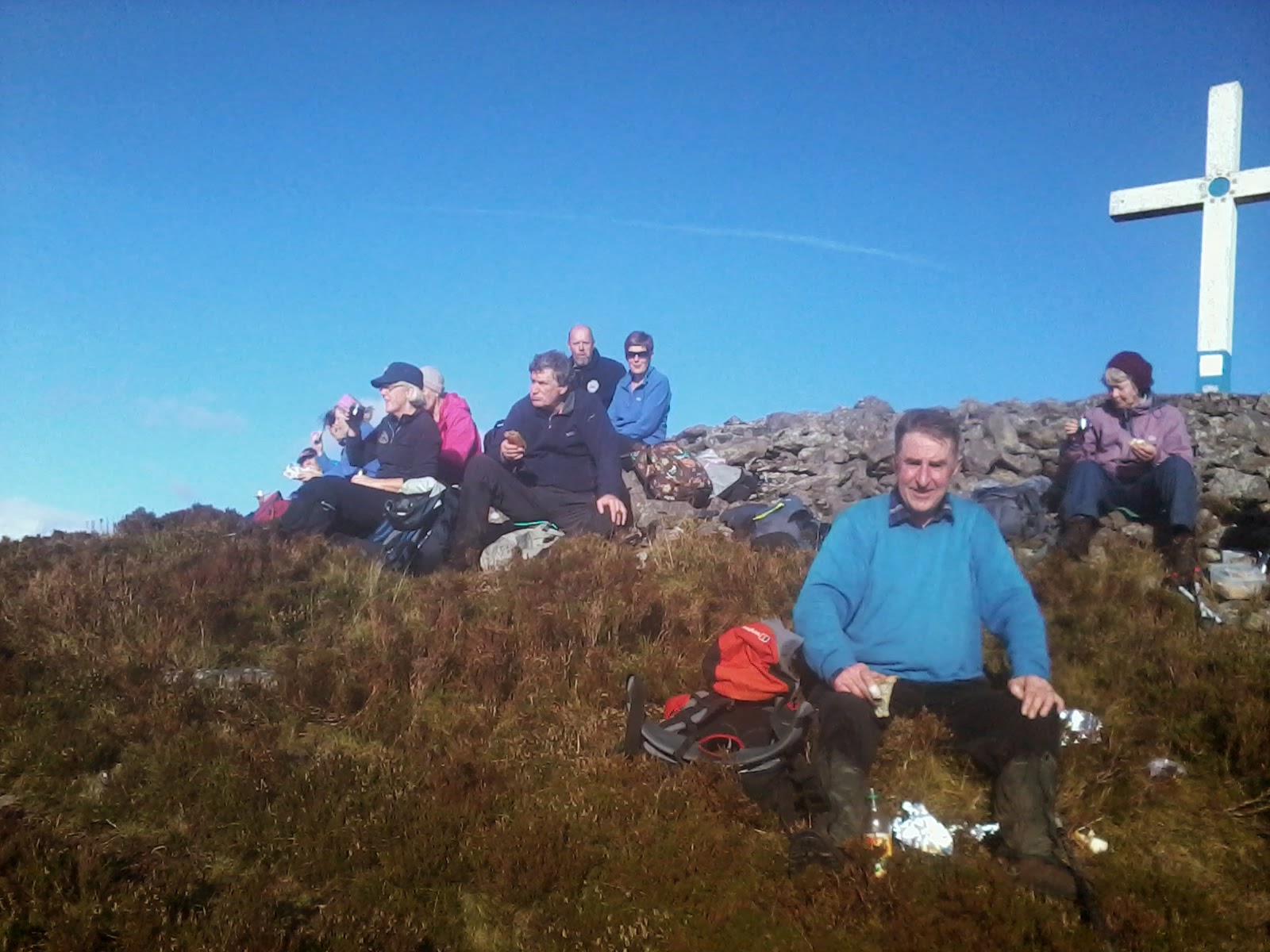 Posted by Dungarvan Hillwalking Club at 14:44 No comments:


C walk Sunday 9th November.
Kevin Moore led 23 of us to visit the Comeragh Lakes. On arrival, he decided to alter course, as underfoot conditions were not to his satisfaction, and headed instead to the Sgilloges.
We made our way in orderly fashion towards the lake, receiving a few short breaks, and arrived to beautiful sunshine. During coffee break, Kevin explained the history of the area, including the Seanbhean agus an Píoba (all understood except brit Caitriona)
We headed back and Kevin was worried as daylight was fading. Tom Murphy, sweeping, asked some ladies to ease up on the talk, but to no avail, but amazingly, the talk increased but so did speed of walk. Tom suggested we change the name of the club to The Talking Club but no takers. Needless to say, we arrived back safely, and seriously, a great days exercise was had by all, and good to see a few new members present also. Buíochas to Kevin.
Donal McGovern.

14th November Night Walk
A brave group of 6 ventured onto the mountain at 18:00 on a dark cold and very wet under foot walk. The idea was to experience walking on mountainous terrain in the dark and to see how different everything looks at night. At the Carraigaline mast we turned off our torches and experienced the eerie calm and blackness, with only the distant lights of the surrounding villages to give us any orientation. A short walk but a great experience, which will be repeated next year.
Richard

SEMRA
Congratulations to all club members who supported and completed the Long Way Round night walk on the 29th. A great night was had by all.


Sunday 30th November
A dozen set off last Sunday, rucksacks bursting with gear, hot drinks and tucker, for a day that started off at minus 2 degrees. We were in for a pleasant surprise though; it was pleasantly warm with clear blue skies and barely a breeze in it. Some were heard complaining about how the bright sun was impeding their vision…isn’t that a great complaint for late November.We started off not far from Mountmellary and proceeded to the Liam Lynch Memorial where we sat on the low wall in front of a sculpture of cast bronze Irish Wolfhounds. We ate our lunch and as always dining al fresco is wonderful. We then progressed by climbing up to Cruachan West stopping to take in the views. Tom then lead us on to Knockmeal and it was from there we began our trek downwards and back to the cars for five minutes, before the obligatory stop-off at the Cats Bar. What a lovely end to a great day. Thank you Tom.
Clare Grace
“A Walk For All The Seasons” Sgilloge Loughs-Coum Lara Horseshoe Walk.
Oct saw our intrepid “C” walkers back in the Comeraghs to walk the 11Km. Sgilloges/Coum Lara circuit. Our walk started in the beautiful, incomparable Nire Valley, where it is said, “it is easier to walk than not to walk”. A valley that is serenaded night and day by the tall cliffs and many streams that flow into the Nire river. We followed the pathway that leads from Whelan’s farm and out onto the open bogland and the townsland of Carrigeen. This is an area rich in archeological history, with up to 15 sites of interest, with old huts, earthworks, fulacht fiadh and the Carrigeen Standing Stone, considered to be one of the finest examples of its type in Munster. From here we walked the waymarked  pathway into the upper lake of the Sgilloges in glorious sunshine, with the Sean Bean stream, which flows down from the steep cliffs of the sandstone rock of the ridge, forming a perfect backdrop. The heavy rainfall of the previous 3 days, and the northerly winds made it an impressive sight, whipping the water upwards onto the platue above. After a short break we climbed the gentle slopes out over the shoulder to the east of the lake, and contoured into Coum Lara, crossing the fast flowing stream that flows out of the Coum. From there, we crossed over open bogland and heather covered boulders to arrive at The Gap and join up with Boreen an Socraid/The Funeral Path. To the northwest, Knockanaffrin Ridge rises majestically, and away in the distance we had a clear view of Slievenamon, whilst to the south, the steep climb onto Carrigshaneun looked imposing. Throughout the 19th century, and indeed into the early part of the 20th. century, the Boreen an Socraid path provided families who lived on both sides of the valley with safe and easy passage, and in 1930, locals witnessed the last funeral procession to cross the mountain track with the remains being taken from Rathgormack to the Nire. As daylight began to fade, the group headed back the pathway, to arrive back at the Nire Carpark in glorious winter sunset. A pleasing feature of the walk was the number of walkers who crossed the route for the first time, and it was great to see new members out in the mountain in such high numbers, so why not encourage a friend to join the club and experience for themselves the beauty of the Comeraghs.


Rita Moore
Posted by Dungarvan Hillwalking Club at 14:31 No comments: