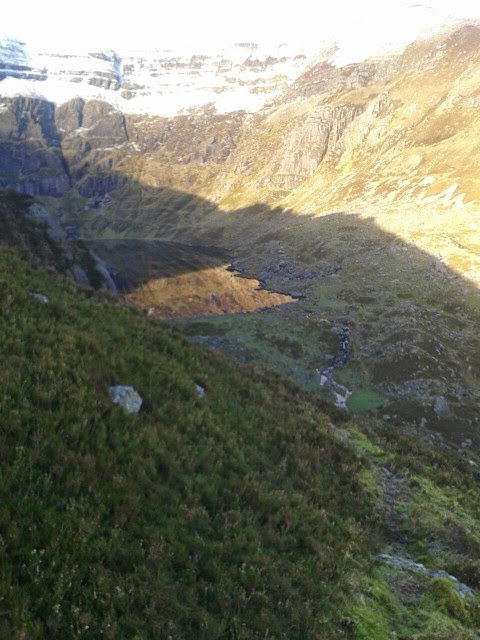 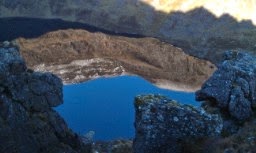 A very blue sky
Posted by Dungarvan Hillwalking Club at 16:22 No comments:

CHRISTMAS PARTY.
The annual Christmas party held in the Dungarvan Tennis Club on the 20th December was a great success. Many thanks to everyone who made it such a fun filled night.

ARDMORE MULLED WINE & MINCE PIE WALK. December 21st.
Despite a late night for some following the Christmas Party the night before, a great crowd turned out on the day to make this a most enjoyable event. The club raised over 400 Euros for the Dungarvan Lions Club which was presented to Mr Shay O' Connor, President of the Dungarvan Lions Club. Mr O' Connor thanked the club for their generosity.
As we gathered around to enjoy our mulled wine and mince pies after our walk, an eerie sound was heard in the distance. Then from the mist, a tall figure emerged, dressed splendidly in full regalia playing a glorious set of bag pipes. David Byrne entertained us all with some traditional Christmas Carols. Thus ending a most enjoyable day for us all. Many thanks to all those who organised the event, those who brought mulled wine, mince pies, cakes, teas and coffees etc.Thanks also to John Brown who lead the walk.

DECEMBER 28th Walk.
Following the walks, both B and C walkers gathered in the Tudor House Bar to enjoy a well earned bowl of soup and bread rolls. Many thanks to the owner, Mr. Declan Ahearne for looking after us all so well.

NEW YEARS DAY WALK
Despite the dreadful weather conditions on the day, a brave group of 9, led by John Brown, ventured forth to the beautiful are of Glenshelane to enjoy the first walk of 2015. John told me that it was overcast with some drizzle, but this did not spoil the day. Well done to all.

SOME MORE NEWS.
·         On the club night in February we are inviting founder members along to celebrate 20 years of the club. Past and present members welcome.
·         We are looking for people to play an organising role in the Comeragh Crossing, Ideas on a possible restructuring are also welcome. Contact Richard Dykes. 086 2411287
·         It is hoped to hold a basic navigation course in 2015. We will keep you informed when the arrangements are finalised.

ARCHAEOLOGICAL C WALK.25th January.
Barrows, stone circles and Fulachtal Fia around Araglin Valley. Not a demanding a walk, but more of a recognising and finding Stone/Bronze age features.

KILLARNEY TRIP.
A weekend in Killarney is being organised as part of the 20th Anniversary of the founding of the club. The provisional date is 10th to 12th April. (Weekend after Easter.)

As PRO, I would like to wish you all a very happy New Year. Please keep your walk reports and photos coming to me at. Marie Jennings.


bishopsnest33129@gmail.com
Posted by Dungarvan Hillwalking Club at 09:29 No comments: